THERMOFLEX® is the only program in Thermoflow’s suite which can be placed in the category that engineers commonly refer to as “heat balance software”.  It is a fully flexible program with a graphic user interface in which the user creates a thermal system network by selecting, dragging, dropping and connecting icons representing over two hundred different components.  The program covers both design and off-design simulation, and models all types of power plants, including combined cycles, conventional steam cycles, and repowering; as well as a wide range of renewable energy plants and systems.  THERMOFLEX can also model general thermal power systems and networks, and fulfills the need of some customers for a single, "jack-of-all-trades" program.

THERMOFLEX is easier to use than most other general purpose heat balance programs because it does not require the user to supply initial values or write code or scripts to create a successful working model.  The program has a unique approach: a default hierarchy of pressure and flow dictators will automatically create, by default, a solution for a new design of any common type of power or cogeneration plant.  Additionally, THERMOFLEX includes a family of “Logical Components” that help the user to implement sophisticated network control logic without the necessity to write code or scripts.

The features which make THERMOFLEX so easy to use do not compromise flexibility.  To cover special situations, and to satisfy users seeking full control, THERMOFLEX provides the option to overrule the default flow and pressure hierarchies; and allows the users to write scripts to impose any desired logic on the network or components.

The basic THERMOFLEX may be licensed on its own, or in combination with the PEACE module.  On its own, it is a comprehensive heat balance program, which compares favorably in functionality and license price with any other heat balance software.

Combining THERMOFLEX with the PEACE module takes it beyond heat balance

Adding PEACE to THERMOFLEX provides access to a set of more sophisticated engineered components.  These additional PEACE components include design creation knowledge, similar to what is available at the component level in Thermoflow’s dedicated expert programs.  They empower THERMOFLEX / PEACE to rapidly create physical designs for major equipment and BOP, either automatically based on the built-in logic, or based on the user’s selctions and inputs if desired.

THERMOFLEX / PEACE estimates the overall dimensions, weights, and costs of each item of major equipment or BOP, including labor and material costs associated with their installation.  Additionally, the PEACE module allows including all plant costs that are not directly related to the heat balance, such as site work, civil, electrical, tankage, buildings, fire-fighting equipment, etc, leading to a complete plant cost estimate, cash-flow analysis, and preliminary economic pro-forma.

Models created by PDE, GT PRO, GT MASTER, and STEAM PRO can be loaded into THERMOFLEX / PEACE for further analysis or graphical modification.

THERMOFLEX can subsume, within its network, models built and run in a dedicated expert program.  For example, a district heating system can be built and run within THERMOFLEX, with the heating steam coming from, and its condensate returning to, a GT MASTER combined cycle running as a sub-model within THERMOFLEX.  Basically, the entire GT MASTER combined cycle in this example is treated by THERMOFLEX as one massive icon within its network.

With over 200 components, THERMOFLEX can be used to produce heat balance diagrams of emerging technologies. These include air liquefaction systems (shown below), power generation from stored liquefied air, oxyfuel CO2 gas turbine cycles such as the Allam Cycle (shown below), plants equipped with electrolyzers, hydrogen storage in conjunction with wind and solar, etc. With the breadth of THERMOFLEX's thermodynamic capabilities, the only constraint is the user's imagination. 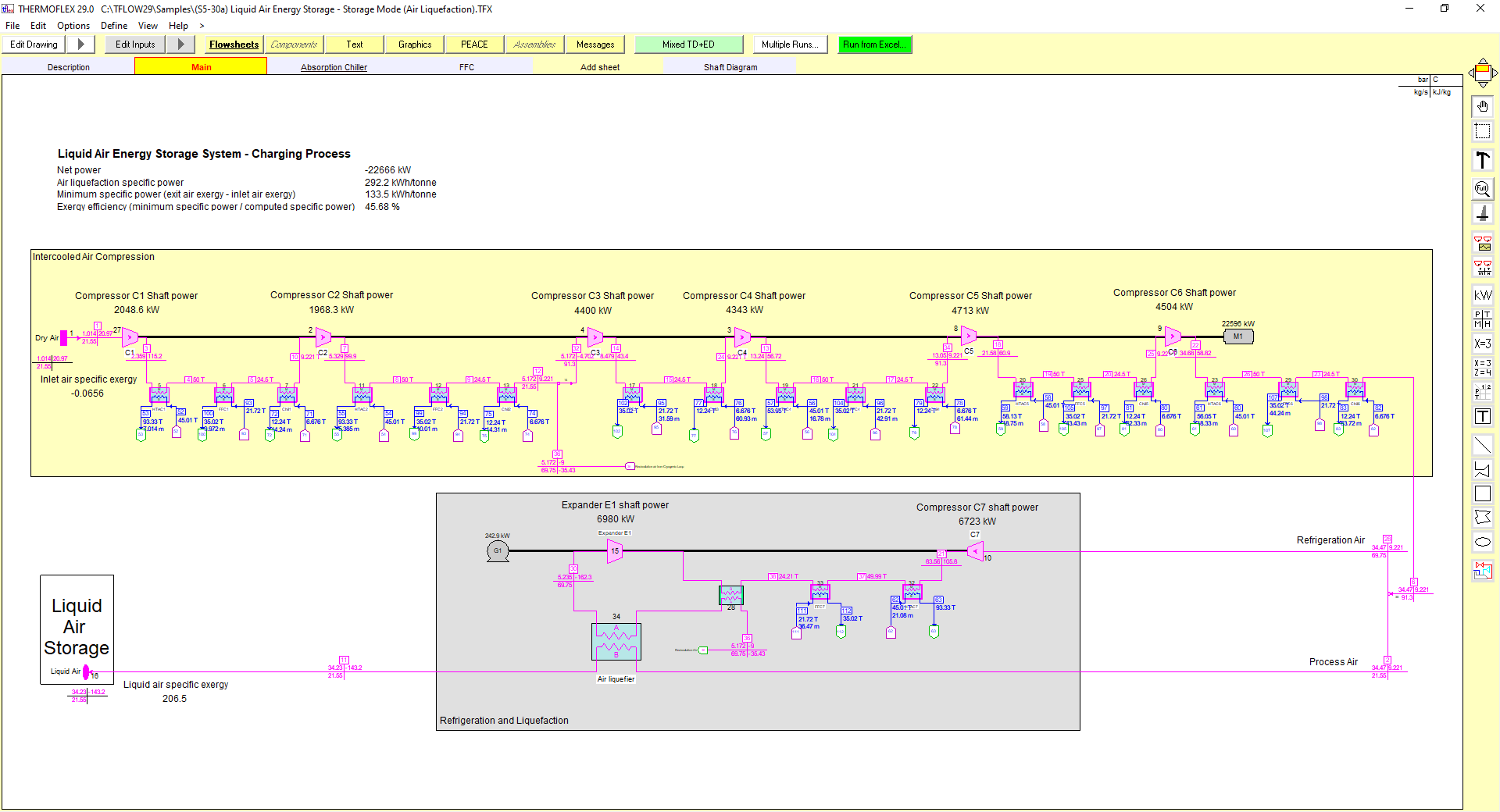 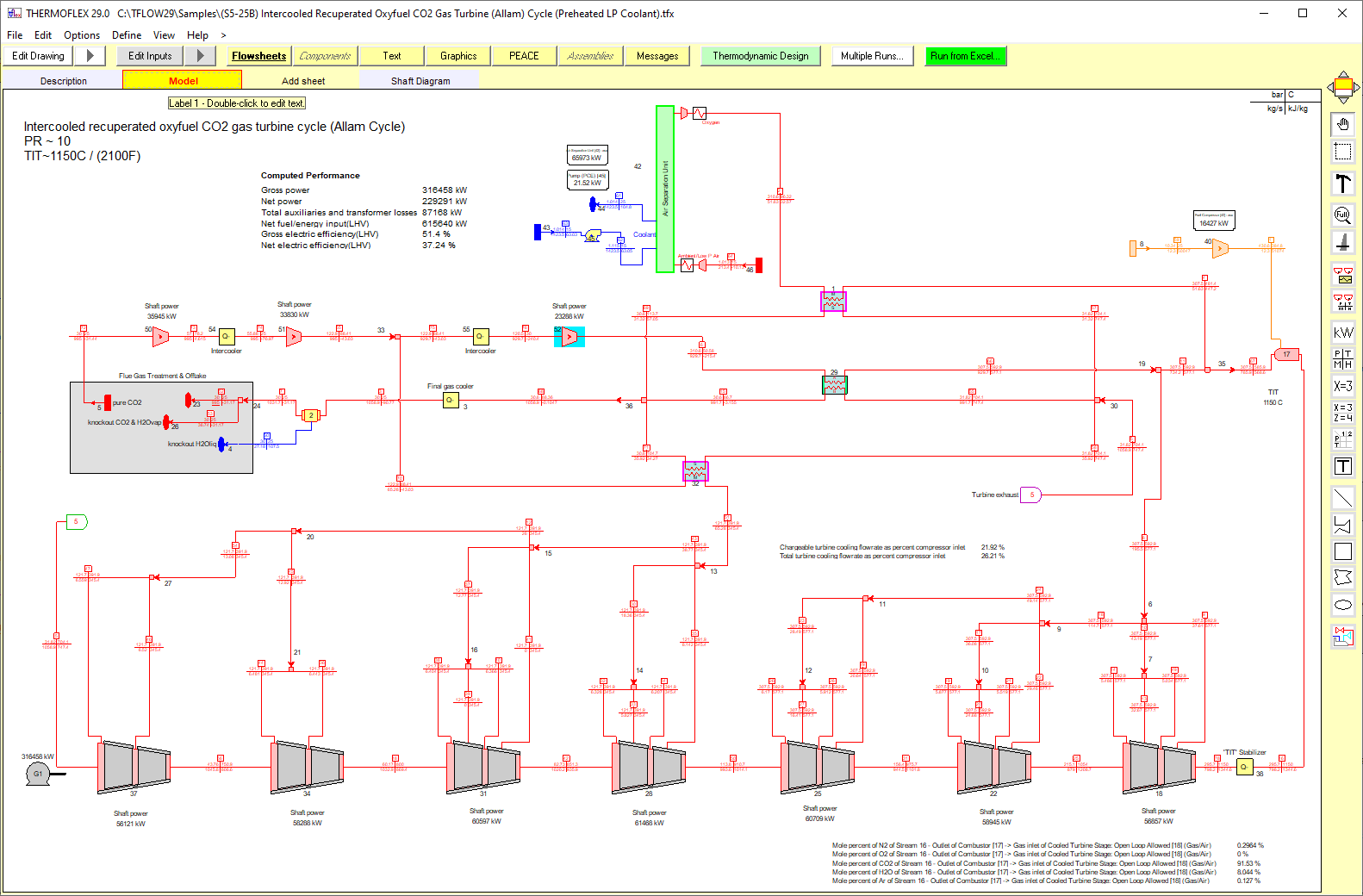